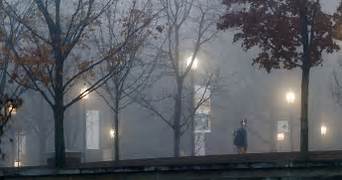 The night I met the demon was a night like any other. I was on a midnight walk, I was avoiding my roommates like the plague, and my friends and I were listening to ghosts.

Wherever I went they called to me, flickers of emotion, a candle kept hidden under someother-worldly bushel. The campus was full of them, energy left over from moments of extreme joy, pain, and isolation. It started suddenly, inklings of unexplained feelings blossomed into my awareness like so many spring chrysanthemums. At the time that I met the demon, I was just becoming aware of other…flickerings. Emotions and images I couldn’t understand, so mired they were in darkness. Old flickers. I met with a friend, Brian, who felt similar things and had for years.

We sat in his cluttered single, him on his bed, me on the space of floor I had cleared for myself. In the dim glow of his string of Christmas lights, he regarded me.

“I want to take you on a spirit walk” he said. It was like he suggesting we pick up lunch at a new café or sit in on some professor’s class.

“What would that entail, exactly?” I shifted where I sat, trying to avoid touching the pile of laundry that had built up in the corner.

“Simple,” he said, “You, Anthony and I will walk in the woods and you tell me what you can feel.” Anthony was another friend of ours who could feel ghosts. He was incredibly sensitive and in tune with people, I couldn’t fathom the depth of the connection he had to other people’s pain. I nodded; it made sense that Brian would invite him.

We ended up chatting about our weeks while we waited for Anthony to finish his seminar, which got out absurdly late at night. Brian talked about how many meals he had forgotten to eat (stress and Prozac are a hell of a combo) and I bitched about my roommates, two jocks who treated their queer roommate with as much humanity and civility as you might expect. Brian started rummaging around his room for things, he threw some books and a flask of what I later learned to be holy water in a bag. He grabbed his phone from where it was charging in the wall and we left to pick up Anthony.

How exactly the exorcism started, I cannot recall. We were ambling in the woods by the South dorms, I would describe whatever spirits I was feeling and Anthony or Brian would nod or comment if they felt the same thing. There were a lot of old, lumbering things in the woods, things that radiated a dull malice. Anthony and I were discussing one such entity that felt particularly strong when we realized that Brian was reciting something in Latin.

He was reading something on his phone and gesturing into the dark, fumbling over the Latin like someone tying a shoe for the first time. And then. We felt it.

A vile thing blossomed in front of us, a sickening fold of malice, filth, and soul crushing despair. I felt it in the air in front of us, the feeling of bad given shape. Anthony felt it too, tensing in the same moment that Brian was struck mute. We looked at each other and Brian mouthed one word.

I haven’t fucked with exorcisms since.